some time ago, i read someone’s blog post about learning how to learn. i couldn’t find that post (if you’ve read it and remember the source please let me know so i can link it here!), so instead i’ll loosely summarize what i remember from it (there may be inaccuracies in my recollection). the blog post involved an amateur bowler. he started off with a technique he developed himself that was pretty good - in fact, good enough for him to defeat most people that he was bowling with in his close, local circle of friends. however, when he started competing in larger tournaments with more people, he discovered that he had been nothing but a big fish in a very small pond. a lot of his competitors had learned bowling properly, with a different technique. our original bowler convinced himself that he could continue to succeed in competitions using his own improper technique, but soon discovered he had hit a roadblock - he could not manage to progress higher than his current score, no matter how many hours he practiced or how many competitions he bowled in. so he settled down and tried to learn the proper techniques for bowling, but realized that he had to unlearn the improper technique that he had grown used to using first.

there are two lessons i grasped from this blog post:

starting on march 18, 2020, i’ve been trying to draw at least an hour a day, starting back on fundamentals from this website called drawabox that i found. i realized that i hit a roadblock with my art awhile ago - i think for two main reasons.

the first is a lack of technical skill. even though i took some art classes when i was much younger, i’ve either forgotten a lot or just haven’t learned how to draw from construction very properly. and i haven’t been very conscientious about incorporating those technical skills when i’ve been drawing in the past couple of years. additionally, i realized that a lot of the art lessons i was taught when i was younger were based on observation - how to draw something by staring at a reference image and drawing what you see instead of what you know. the new exercises i’ve been doing are focused on drawing something from construction - understanding the forms and shapes beneath the object and understanding how those forms interact with each other in 3d space. (i’m not even getting into understanding how light, color, etc. works yet!) a lot of these exercises end up also using reference pictures, but the ultimate goal in the end is to be able to construct images purely using your understanding of what forms you need to use and what these forms might look like when drawn flat on a page, based on the perspective you’re viewing them from (of course, you can - and probably should - use references to confirm your understanding, but this technique helps you eventually be able to construct images from imagination).

but the funny thing about drawing from imagination is that you have to have that imagination first. which brings me to the second thing that i think i lack at the moment - creativity. i don’t have any particular stories to tell, themes, emotions, etc. to convey, and in the past i’ve drawn mostly to create something aesthetically beautiful. and while i don’t think there’s anything wrong with creating art simply to make something beautiful, or to destress, i think my own work is somewhat flat because i’ve mostly drawn for those reasons in the past. i feel like my art lacks meaning and purpose. i don’t really have an answer to this issue either. i was hoping that my lack of creativity was caused by me not being able to accurately convey what i wanted to due to lack of technical ability, but i’m starting to think that it’s an entirely separate problem. i think there are ways to become more creative - like purposefully imagining stories or ideas or using prompts to come up with new ideas. but i think this is a skill that i’ll have to wait to develop until i become more technically capable.

(this is on a tangent, but i’m amused by how many people have told me they think i’m creative because i draw. i’ve never felt that i was creative simply because i could look at a reference photo and render it passably well. i really admire people who can take an idea and make it their own or come up with some new, original way to express something. i’d love to learn design someday, because i think design is really all about ideas. aesthetics are important too, of course. but without ideas behind it, it’s all shallow and empty.)

also, here are some of the insects i drew for lesson 3 of the drawabox exercises: 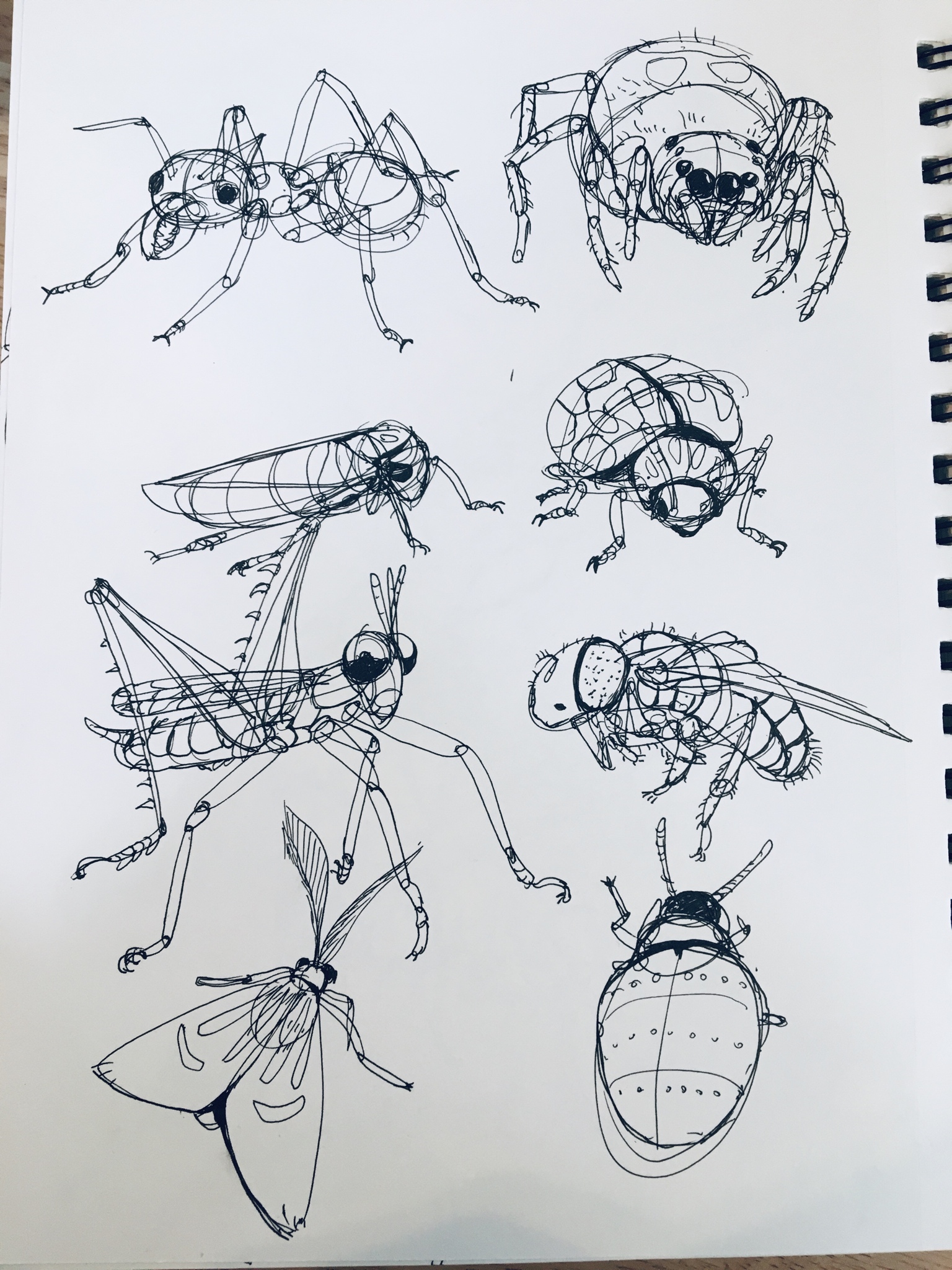 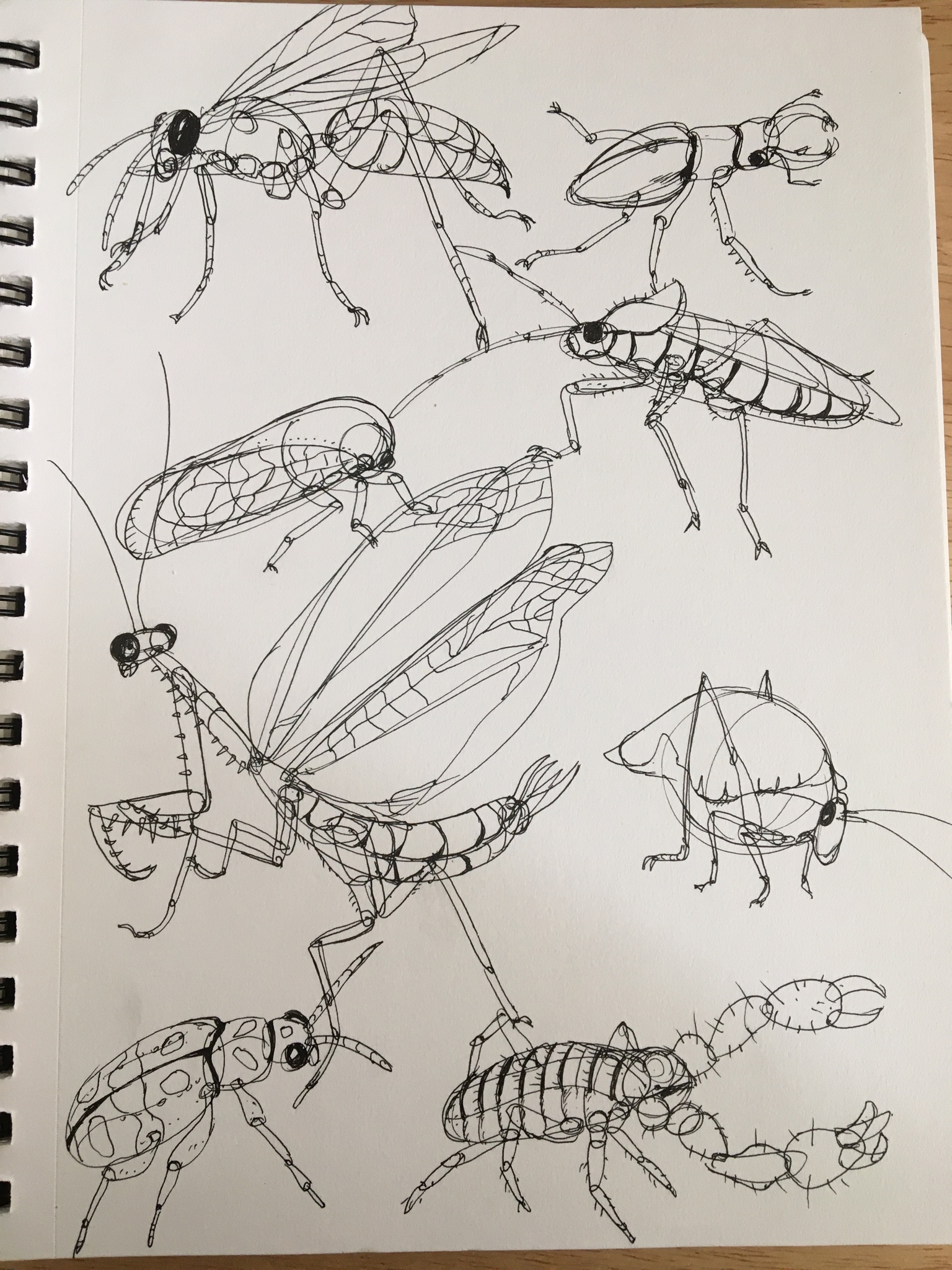